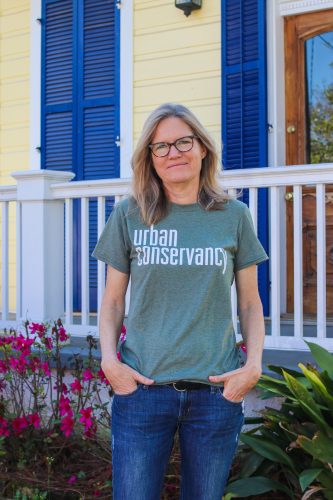 The Urban Conservancy’s Dana Eness was interviewed by the Preservation Resource Center for the April 2021 issue of Preservation in Print:

“The Urban Conservancy’s Front Yard Initiative (FYI) helps residents to rip up excessive concrete around their homes. Excessive concrete can exacerbate flooding. Tell us how that program got started and how it works.

‘The program started in about 2014 with a frustrated constituent trying to bring some attention to the fact that people in his Uptown neighborhood were paving their front yards, in violation of city regulations, in order to reduce maintenance and increase off-street parking, and there didn’t seem to be any enforcement. We partnered with The Lens news website (excessive paving was an issue that Lens founder Karen Gadbois was reporting on) and invited neighborhood leaders and city staff to come together to discuss the issue.

From that dialogue, we realized that, in addition to people intent on paving, there were many people who had more paving on their property than they wanted but just didn’t know how to go about getting rid of it. We decided we wanted to focus on helping those who wanted to transform their property so it would hold rain where it fell rather than run off and contribute to our street flooding and overburdened pumping system.'”