Creating local, sustainable economies is one of the core values upon which we founded The Urban Conservancy. As New Orleanians struggle to envision our city in aftermath of Hurricane Katrina, we are convinced that sustainability – environmental and economic – needs to be the organizing principle for our efforts.

Just and Sustainable: A Vision for New Orleans

In 10 years, New Orleans will be a model for a just and sustainable community. This is the vision that The Urban Conservancy has put forward for New Orleans.

In the wake of Hurricane Katrina, energy efficiency and modern, environmentally-responsible building materials are the key to good home investment and the answer to rebuilding New Orleans better than before. This Event is Free and Open to the Public Including:

What Makes a Healthy Neighborhood?

Planning and creating healthy communities is part of a long-term strategy for sustainability. What makes a neighborhood healthy? The Prevention Research Center at Tulane University created a guide (archived) for understanding what a healthy New Orleans neighborhood might look like.

The Healthy Building Network (HBN) is a national network of green building professionals, environmental and health activists, socially responsible investment advocates and others who are interested in promoting healthier building materials as a means of improving public health and preserving the global environment.

If you are interested in learning about how to build healthy, sustainable buildings or what you can do to make your home more environmentally friendly, they have lots of great information on their website. While much of the discussion is aimed at professionals in the industry, they can help you understand the pros and cons of various materials and can help you understand which systems claiming to certify green products truly represent progressive standards and which are industry-sponsored green-washing.

The campaign to remove the Claiborne Expressway, also known as the Claiborne Overpass, has gained significant traction in recent years, thanks in part to the efforts of Amy Stelly, a New Orleans resident, community organizer and Urban Conservancy board member. Stelly has been working with a coalition of residents and organizations to advocate for the partial demolition of the expressway and its conversion into a boulevard, with the goal of addressing the negative impact the expressway has had on the surrounding Black neighborhoods and bringing about much-needed revitalization for the community. The future of the Claiborne Expressway, and the impact it will have on the community, remains a topic of ongoing debate and discussion.

Urban Conservancy board member Amy Stelly is featured in this piece by Sarah Alessandrini which appeared recently The American Prospect.

See what Amy has to say about the history and adverse effects of the construction of the Claiborne Expressway, and now the potential for job creation and heritage preservation represented by the tearing down of that same New Orleans highway.

She also sees the highway removal as an opportunity to teach residents historic preservation techniques, which, along with other job skills, can be applied to maintaining the area’s centuries-old buildings. “That’s what makes New Orleans beautiful,” Stelly says. “There’s a lot of opportunity to put people back to work, but also to train people in the building trades that are really special to New Orleans, so we can maintain the character of the city.” 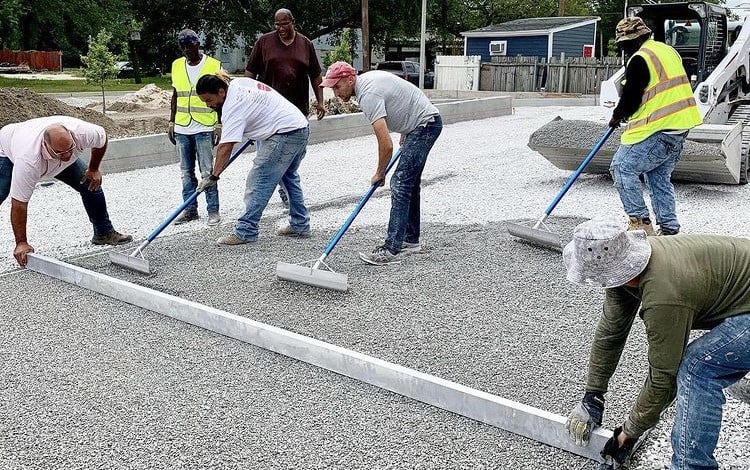 Work on the Jerusalem project was completed by Thrive Works Green, a nonprofit workforce training program.

“Our program is truly one of a kind,” said Chuck Morse, Thrive executive director, in a press release. “We use a holistic approach, walking alongside our trainees before, during and after the program to ensure their needs are met, whether it’s with a weekly stipend, soft skills, mental health support, etc. After they graduate, we connect them directly with contract opportunities.”

Read more of this story here.

Listen to the story here

After Mardi Gras in 2019, garbage trucks collected 1,300 tons of trash, or about 2.6 million pounds, when the revelry was over. In the past, the city has even measured the success of Mardi Gras by the amount of trash it picked up.

For decades the heaps of garbage have been a perennial discussion, and for decades critics have been pushing for officials to do something about the problem. They say it’s not only bad for the environment — a lot of those plastic beads, trinkets and trash end up in landfills — but also bad for drainage, because much of it gets stuck in the city’s storm drains. The beads have been found to contain lead and other toxins.

After the Department of Public Works pulled about 40 tons of beads out of the storm drains in 2018, the Urban Conservancy held a summit to discuss possible solutions. Mayor LaToya Cantrell last year banned krewe members from throwing entire bags of beads off floats, but otherwise not much has changed, policy-wise.

This year, advocates for a “greener” Mardi Gras are hoping the city can learn something from a carnival without parades, and the plastic excesses that traditionally come with them.

Grounds Krewe is one of several nonprofit organizations devoted to reducing the environmental impact of the holiday, from the production and shipping of beads from China, to what happens to them when they hit the ground. The group even started a krewe called TrashFormers, which collects trash and recyclables along parade routes.

“Why is this stuff being made halfway around the world … to be thrown off a float only to land in the street … only to be dumped into a landfill?” he said.

Locally made throws haven’t been an entirely easy sell because they are more expensive. Still, Davis has been working to change the culture of each krewe, rider by rider. He makes little sample bags to distribute to them.

With parades canceled this season, Davis sees it as an opportunity to rethink the holiday.

To the Urban Conservancy community:

The disproportionate health, housing and economic impact of COVID19 on Black New Orleanians and the heinous murder of George Floyd while in police custody remind us that structural racism is built into our society. It disadvantages people of color before they are even born.

The Urban Conservancy believes that sustainability is about more than “lasting” or “maintaining.” It means “thriving.” That means economic parity and making sure people of every race are able to go about their lives freely and without fear of death or harm.

The Urban Conservancy pledges to continue to work alongside those righting the racial injustices of the past and the present so that New Orleans’ future is safer and healthier for all.  We will continue to strive to build an urban fabric that nurtures and nourishes. We vow to be thoughtful and purposeful in our strategy and actions to ensure justice beyond inclusion.

A growing number of locals are calling for a greener Mardi Gras, but weaning ourselves from cheap plastic won’t be easy.

Nathan Simpson looked at home amid the chaotic swirl of costumed revelers at the recent krewedelusion parade lineup, sporting a blue bodysuit and peering through glowing red lenses at the crowd. Tonight he was Recyclops, and he had a mission: to collect all the aluminum cans and plastic bottles he could get his hands on.

Simpson is one of about 20 members of the Trashformers, Mardi Gras’ first recycling-themed marching krewe. While recycling is the focus, the group, founded in 2019 by local architect Brett Davis, hopes to spark a broader conversation about Mardi Gras waste, including the plastic beads and throws now synonymous with the season.

Members dress in eco-pun costumes (Simpson’s Recyclops, inspired by Marvel X-Men superhero Cyclops, was joined by a Pacific Garbage Patch Kid and Oscar the Recycling Grouch), and deploy a fleet of lime-green shopping carts to collect cans and bottles directly from parade-goers.

Simpson, a New Orleans native, said he joined Trashformers to show that we can be responsible without killing the Mardi Gras fun. He grew up going to parades and loves Carnival krewes and balls, but the waste is a problem, he said.

Simpson isn’t alone. As New Orleans faces a host of ecological threats — climate change, sinking land and flooding to name a few — a growing number of locals are calling for an environmental reboot of the city’s Carnival experience, and a break from the throw-away culture and cheap plastic beads and trinkets ubiquitous at parades.

This year, several large krewes, including Rex and Bacchus, have publicized efforts to cut back on the amount of plastic members throw. Arc of Greater New Orleans, which sorts and re-sells beads, employing adults with disabilities in the process, reports donations more than tripled to 190 tons ahead of Mardi Gras 2020. Even the City Council weighed in, approving a new ordinance that bans riders from throwing the plastic bags that beads are packaged in.

Is a greener, plastic-free Mardi Gras possible? Sustainability advocates are optimistic, though they acknowledge it will require a major cultural shift. The answer is more complicated for krewes and riders.

“It’s about changing the culture of how we experience Mardi Gras.”

Cheap plastic trinkets underpin the economics of the season, allowing krewes to attract riders and generate revenue. Wholesalers make millions of dollars on the roughly 25 million pounds of beads imported from China every year, and parade-goers have come to expect a deluge of loot on the route.

Mardi Gras parades in New Orleans are big and bountiful, and that generates a lot of money for the city and local businesses, said Dan Kelly, president of the Krewe of Endymion, whose 3,200 riders each toss 500 pounds of throws on average. Kelly also owns Beads by the Dozen, a wholesaler that imports roughly 5 million pounds of throws each year.

“If you make it too expensive for people to throw these greatest shows on Earth for free, New Orleans is going to dry up,” Kelly said. “It’s not going to be the city that we’re known for.”

At the same time, the cost of cleaning up after parades is rising and taxpayers are footing the bill. The City of New Orleans spent $1.5 million to collect 2.6 million pounds of trash during the two-week height of Mardi Gras season in 2018, according to city records. That was a 60% jump in spending from 2008.

That price doesn’t factor in the toll Chinese-made plastic throws take on our health and infrastructure, said Dana Eness, executive director of The Urban Conservancy. Researchers have found unsafe levels of lead and a range of other toxins in imported beads, which can remain in trees, yards and sewers well after parades. In 2018, city contractors pulled 93,000 pounds of beads from clogged catch basins along the St. Charles Avenue parade route. The headline shocked locals and got national attention.

“The reality is there’s a huge cost that New Orleanians bear, but tourists do not, in terms of wear and tear on the infrastructure, clogged drains, flooding. Things we’re paying for in all sorts of ways,” Eness said. Read the full article here.